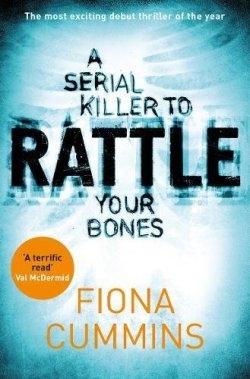 A serial killer to chill your bones. A psychopath more frightening than Hannibal Lecter. He has planned well. He leads two lives. In one he’s just like anyone else. But in the other he is the caretaker of his family’s macabre museum. Now the time has come to add to his collection. He is ready to feed his obsession, and he is on the hunt. Jakey Frith and Clara Foyle have something in common. They have what he needs. What begins is a terrifying cat-and-mouse game between the sinister collector, Jakey’s father and Etta Fitzroy, a troubled detective investigating a spate of abductions.

I am not going to lie, this book did scary me quite a few time while reading. I was expecting it to be that creepy or unnerving, but it really was. I had to stop reading it just before bed because I found it hard to switch off from the story to go to sleep. But I suppose I felt like this because I really liked the book, the story and the writing. Everything abut his book (event the creepy parts) makes this an unputdownable read.

Normally I would give a brief overview of the story, but I think this story is best read without knowing too much about the plot. I only read a small description of the book before jumping in, and I think thats the best way to go about it.

The story is told from different perspectives, which I found really interesting to read about. There was viewpoints from the detective, victims and their families, and also the killer. It was nice getting to know the characters in more detail by reading their chapters, and for me it made me connect more to certain characters because we got to see and feel things through their eyes.

I found the book to be really well written and it was hard to tell that this was a debut novel. I was glued to every page and each word sucked me further and further into the story, and still wouldn’t let me go even when I finished the book. Fiona Cummins has such a way with words that everything she writes entices you to read more and more. The way she describes some scenes in the book will paint such a vivid picture in your mind, you will forget your reading a book, and instead think you are watching a creepy horror film.

Another thing I really liked about this book was the pacing. I didn’t find myself getting bored or become tired of the plot. Everything in the book seemed to progress as it should, which made me want to read more because it was always interesting. Yes at times I had to set the book down, but that was not because I wasn’t enjoying what I was reading, it was the case of getting a little too creeped out. Even though to me this is a chunky book, it doesn’t feel like it because you become so invested in the story and the characters, you don’t even think of the page number while reading. The one thing I wasn’t too keen on was the ending because it left it a little too open, but that was before I found out about a sequel. Now I know that there is a second book in this series, the sending for this book leads perfectly to the next book.

With halloween round the corner I would definitely recommend this book to readers. If you love an interesting thriller with a eerie twist, then this book is absolutely for you. The plot is really engaging and well thought out , the characters are fully developed and superbly written. This book has been getting so much hype, and I can whole heartily say that all the hype is most definitely deserved. I can’t wait to see what the author has in store for us in the sequel.

2 thoughts on “Rattle by Fiona Cummins”